Navigating the crypto market isn’t easy lately as most of the well-known tokens are turning out to be quite appealing, making investment decisions confusing. To help you with that, we’ve compiled a few names of tokens that made the biggest gains, along with some projects that could potentially turn out to be super lucrative. So, let’s get started.

Ravencoin is a decentralized, open-source blockchain project that was launched in 2018 with the goal of enabling anyone to issue tokens on its network. The coding infrastructure of Ravencoin is based on a fork of Bitcoin, and the project offers token issuers an alternative to smart-contract-centric blockchains such as Ethereum. 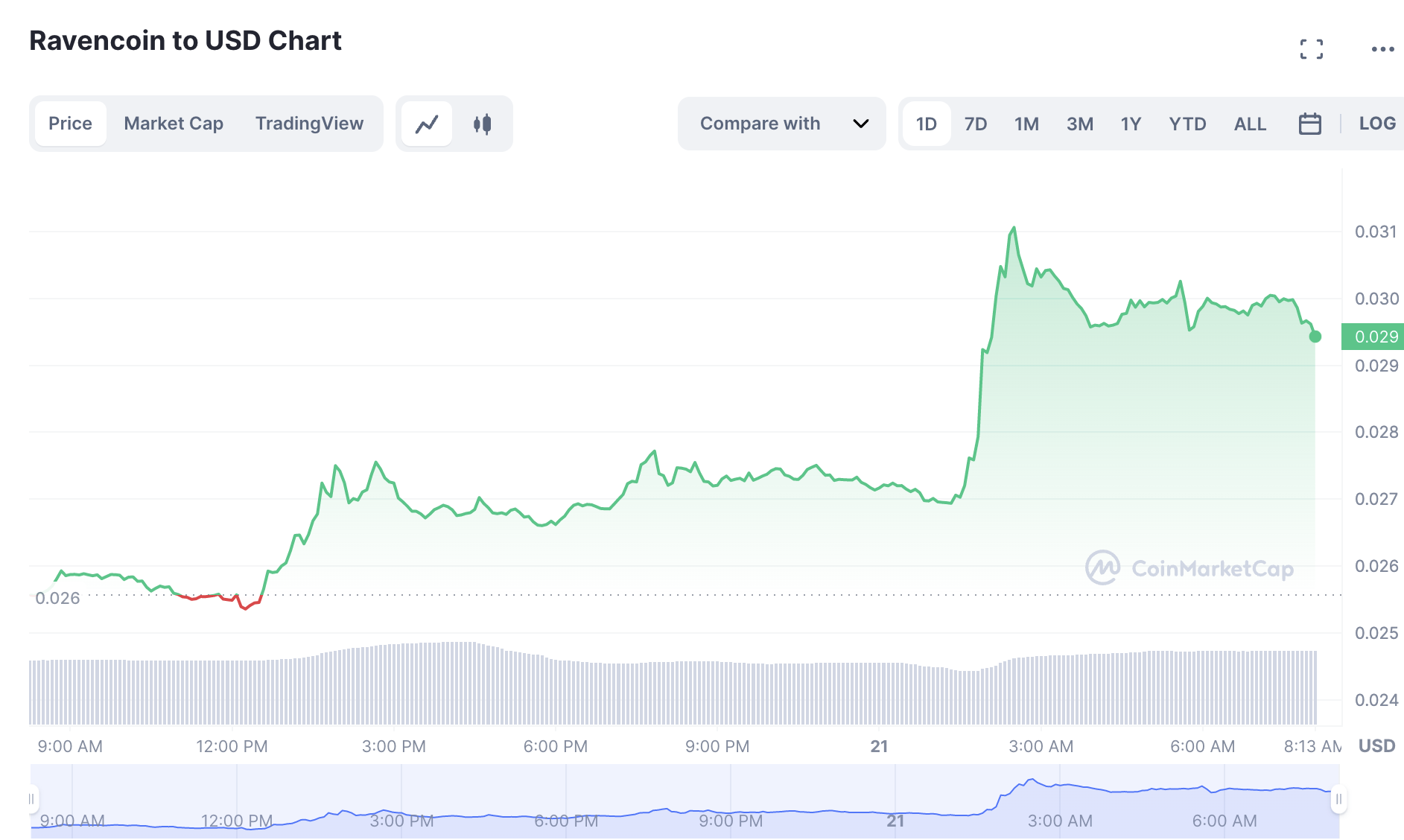 Ravencoin’s main advantage over other platforms is its decentralization-friendly consensus mechanism and security model. The Ravencoin project was launched in 2018 along with its RVN token, without an initial coin offering or pre-sale, to provide fairer and more democratized access to the network. Also, the Ravencoin crypto protocol is open-source, so anyone can run, change, and contribute to the code.

One of the key features of Ravencoin is its unique mining algorithm, called X16R. This algorithm is designed to allow for more decentralized mining than Bitcoin’s SHA-256 algorithm by resisting mining via application-specific integrated circuit chips (ASICs). This means that it is more profitable for individual hobbyists to mine on the network, as opposed to industrial-scale operations.

Additionally, Ravencoin is an “Asset Aware” Bitcoin fork, meaning that it is designed to address the problems of token transactions on the Bitcoin blockchain without introducing smart contracts or changing the consensus model.

Amidst the glory of the market, the RVN token has been pumping quite incrementally for close to three weeks now. Currently trading at $$0.02681 the token has marked an increase of 50% in a matter of weeks. On Jan 20, the RVN token scaled up by more than 12% and some investors believe this to be just the beginning for the token as it grows every day from here.

Frax Finance is a decentralized finance (DeFi) application that is being passed among investors due to its robust product offerings. The platform has attracted significant interest as liquid staking derivatives (LSD) are heating up in the lead-up to the Ethereum blockchain’s Shanghai upgrade. 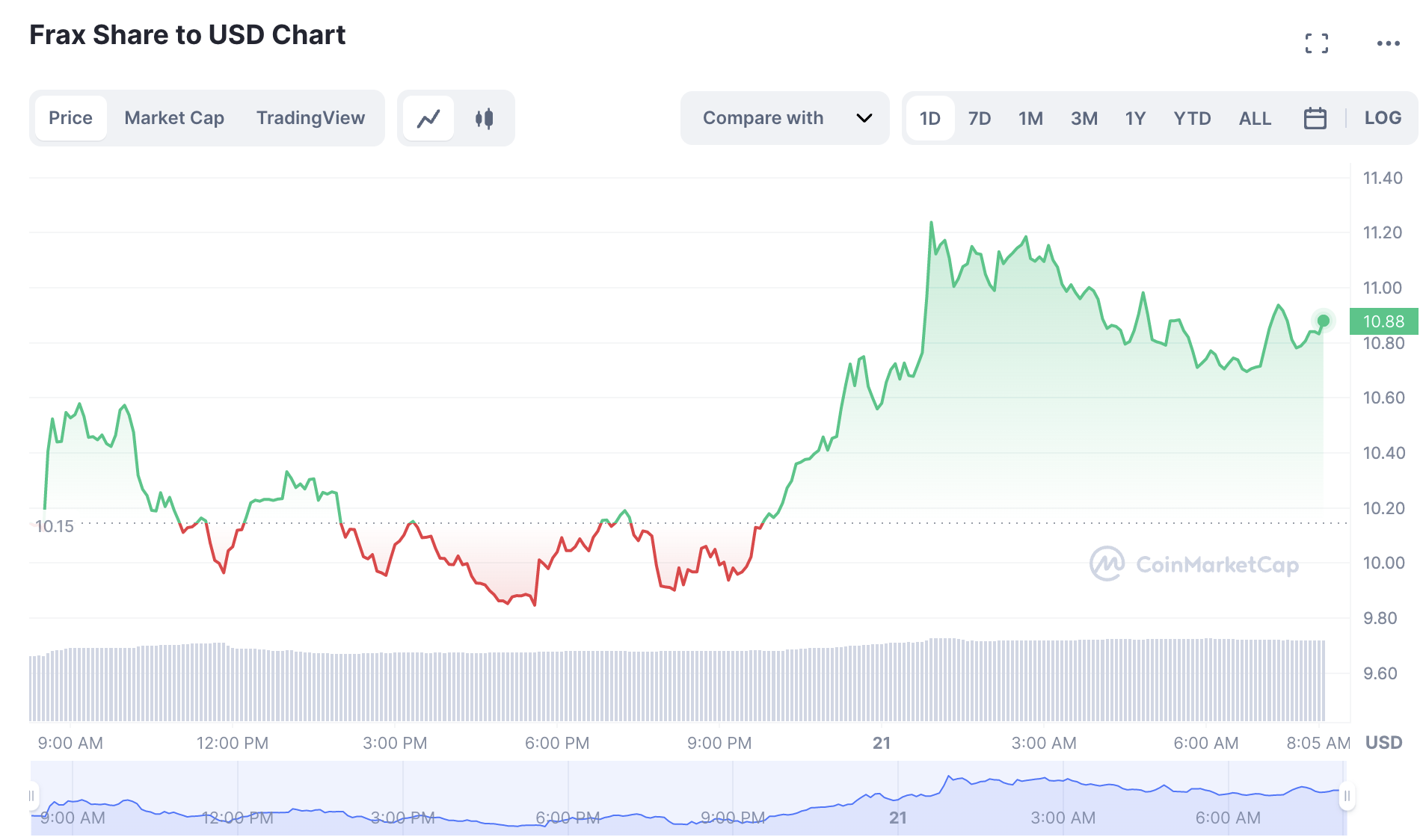 Here’s how the project works: The Frax protocol utilizes a two-token system, comprising the FRAX stablecoin and a governance token known as Frax Shares (FXS). The FRAX token maintains a peg to the U.S. dollar by being partly collateralized by the USD coin (USDC) and by periodically buying and selling FXS to maintain its market capitalization.

One of the key products that are drawing in the capital is Frax’s staked ether product, which allows users to deposit ether (ETH) and receive the Frax ether token (frxETH), which is backed 1:1 with ether. The frxETH token can be freely traded or staked on other DeFi applications or on Curve’s liquidity pools. In these pools, stakers can earn annualized returns of over 6% to 10%.

The growing demand for Frax’s ether pools has resulted in greater demand for FRAX and FXS tokens, with the price of FXS rising over 140% since the market has been on an optimistic swing. Some experts believe that Frax’s treasury holdings of curve and convex tokens are resulting in outsized returns for some stakers, which is contributing to the growing popularity of the platform.

Meta Masters Guild (MMG) is a mobile gaming project that is currently developing three games, with the first game set to launch in late 2023. The company’s presale is currently underway, with buyers keen to purchase MEMAG tokens in the earliest stages.

As far as the company’s mission goes, MMG’s focus is on the longevity and fun of the games over tokenization and earning mechanics. The platform has several advantages over other crypto games, positioning itself as a play-and-earn project over play-to-earn.

Since mobile games are cheaper and quicker to produce, they are more attractive to casual gamers, and the mobile gaming market is arguably bigger than console and PC gaming combined. Additionally, MMG’s strategy of using a second token (GEMS) for rewards/currency helps to avoid the consistent selling pressure that some other crypto games face.

Interestingly, MMG is also developing a bustling marketplace with all in-game assets ownable and tradeable as NFTs, and will also invite other developers and indie studios to build on their platform and join their ecosystem.

While it is difficult to predict the future price of the Meta Masters Guild (MMG) token as it is subject to various market and economic factors. As the presale of the MEMAG tokens is currently underway and showing strong demand, it could indicate a positive outlook for the token’s price in the future.

Fight Out is a cutting-edge fitness application and gym chain that has raised $3 million in the presale of its FGHT crypto token designed to power its web3 ecosystem. The presale is currently in its first stage and will end in just 4 days, after which the price of each FGHT token will gradually rise towards $0.0333 until the 31st of March.

The primary gameplay of Fight Out revolves around rewarding users for working out and competing in a metaverse ecosystem. It utilizes smartphone and wearable technology to track performance and features a tokenized economy and an ambassador program with pro athletes. The company also aims to acquire gyms worldwide and promote an integrated web3 fitness experience.

However, potential investors should be aware that the presale could end sooner than the 31st of March, as Fight Out has set a $15 million presale hard cap, meaning once this ceiling is reached, token sales will end. Investors who miss the presale would then have to wait until April when FGHT will list across major centralized cryptocurrency exchanges (CEXs), including LBank Exchange and BitForex.

FGHT is set to list on exchanges for $0.0333, meaning that investors who secure tokens now will be set on a paper gain of 100% once the token is listed. Additionally, Fight Out is running a generous presale bonus promotion and a $250,000 giveaway for FGHT holders.

C+Charge aims to simplify and streamline the EV charging process by providing a comprehensive solution. The platform connects EV drivers to multiple charging networks, allowing them to easily locate and pay for charging stations. Utilizing blockchain technology, the platform enables peer-to-peer payments and facilitates payment transactions, making it possible for EV owners to access carbon credits and other incentives that were previously only available to major corporations.

By utilizing blockchain technology to enable peer-to-peer payments, it aims to solve common problems faced by EV owners such as lack of access to carbon credits or incentives, limited charging solutions with non-transparent pricing, and no unified payment system.

The platform is currently in its token presale stage and has already attracted over $337K at a rate of $0.013 USDT per token. To invest, individuals can create a cryptocurrency wallet, purchase CCHG tokens with BNB or USDT, and link it with the platform.

RobotEra is a new metaverse project that aims to provide an inclusive and powerful platform for users to create and explore their own virtual worlds. The project has raised over $730k in its presale and is set to be a major player in the metaverse space in 2023. The platform is similar to other metaverse projects such as The Sandbox but offers more utilities and a more inclusive pricing model. It allows users to create customized worlds and NFTs within the space, which they can then use as a virtual playground, a virtual meeting point, or as a tradable asset.

At the center of the metaverse is a unique story where users take on the role of a robot in the world of TARO, a robotic planet, and must rebuild the planet piece by piece with the help of robot companions that they design themselves. The simplicity and open-mindedness of this story has attracted a lot of attention to the project and is driving more adoption to the metaverse.

The primary NFTs within the metaverse are robots, each of which is an ERC-20 token, an NFT with unique attributes and a unique look. Users will also have robot companions to help them grow within the metaverse and can use the robot editor to design robots however they see fit. The metaverse also features seven different types of locations, including deserts, islands, hills, plains, and deserts.

The platform’s native token, TARO, is currently in its first presale stage and is available at a cost of 0.020 USDT. In the next round, the price will increase to 0.025 USDT. Investors who purchase the token now are effectively getting it for a discount.

The tokens mentioned in the blog were favored by investors recently, however, that’s no reason to invest in them without doing your due diligence first. As an investor, look into every token you’re considering for investment in detail before making a purchase. This will help you avoid unnecessary losses.

Top Reasons Why Bitcoin Price May Soar Beyond $30,000 this Month